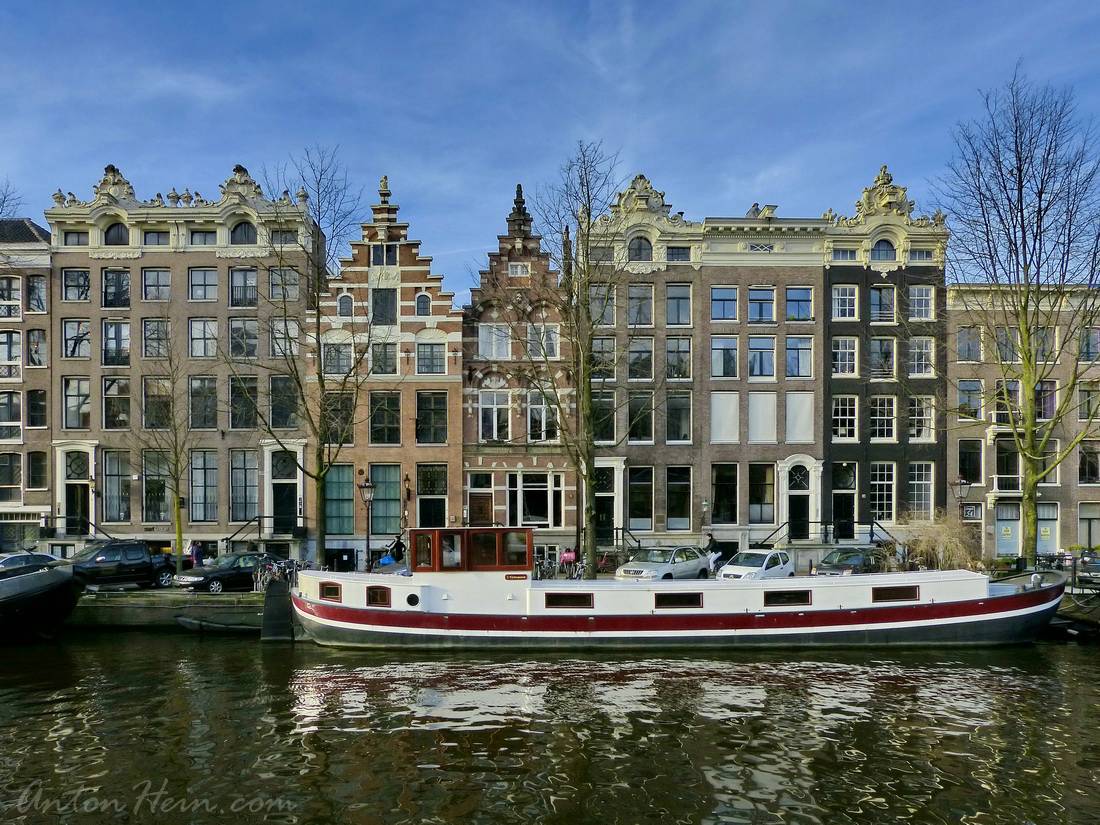 Singel served as a moat around medieval Amsterdam. Click for larger version.

Dug around 1428, Singel1 is a canal that originally served as a moat around medieval Amsterdam. At the time it was known as Stedegracht (City Canal). An earthen wall on the inner side was changed for a brick wall in 1481.

Singel lost its function as a moat when Amsterdam expanded, around 1585.

It is part of the so-called Canal Belt (Grachtengordel — literally, a belt of canals) that was placed on UNESCO’s World Heritage list in 2011.

Singel includes a number of richly decorated, stately houses built during Amsterdam’s Golden Age, which spanned the 17th century. For instance, in the photo the two houses with stepped gables — Singel 64 and 62 (left to right) — were built in 1638. However, the lower part of the house at number 64 was remodeled in Louis XVI style in 1780.

But most of the houses, many of which are designated National Monuments, were built during the 18th century and the early 19th century.

The building at number 68 and 66, on the left, long served as a coach house (with the entrance on the other side, at Langestraat 33) with living quarters.

The middle of the three houses to the right of the stepped gabled buildings, Singel 58, was built in 1753. Its gable used to be identical to the ones at numbers 60 and 56, but was replaced some time during a restoration in the 19th century.

Richly decorated gables were a sign of wealth. Perhaps the owners thought it too expensive to commission a replica to replace the crumbling original.

The barge serves as one of Amsterdam’s 3.050+ houseboats.

I enjoy walking along Singel, trying to imagine what the hustle and bustle was like during the Golden Age. This section of the canal, closest to the river IJ, was long nicknamed “English quay” or “London quay” due to the fact that many ships from England, and particularly London, used to moor here.