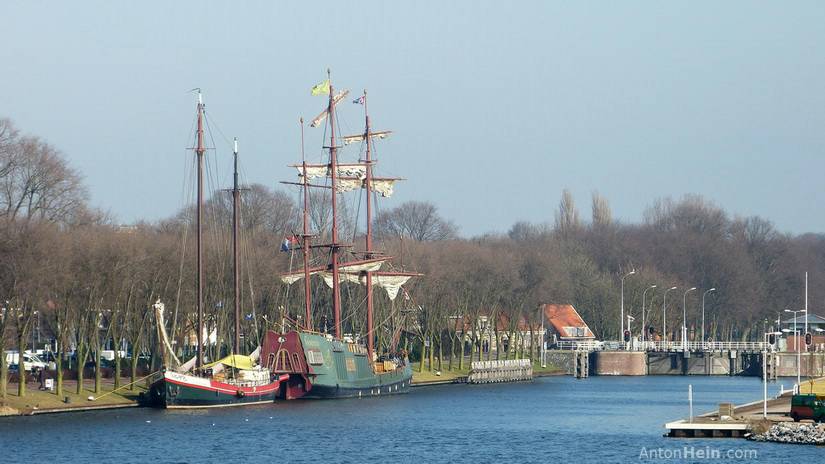 It’s the middle of February, and according to both the astronomical and meteorological reckonings we’re still in the ‘middle’ of winter as well.

Except… thus far this has been an exceptionally mild winter.  Sure, it’s been cold and wet at times, but in Amsterdam we have seen hardly any snow and certainly no ice on the canals.

We’ve had about a week’s worth of grey-sky weather, though. So when I noticed that today the sun was shining in almost spring-like abandon, I dropped my work in favor of spending some time outside.

Inevitably I first headed for Al Ponte, our favorite coffee shop.  I took the photo above from the ferry that brought me there.

There are some hobbyist activists who want the city of Amsterdam to built a bridge between the old town and Amsterdam-North, but few died-in-the-wool Amsterdammers think it is necessary or even desirable. Though not without problems, the free ferries still suffice — and many of us would miss them if they were replaced by someone’s pet-project bridge.

Anyway, the boats in the photo are moored in the outport of the NoordHollandsch kanaal.

This canal — that in somewhat haphazard fashion runs all to the way to the North Sea at Den Helder in the top of the province of North Holland — was dug at the start of the 19th century, when Amsterdam had become increasingly difficult to reach by boats traveling across the South Sea.

Shallow waters close to the city became impossible to traverse, which made it necessary to transship goods to smaller boats — a time-consuming and expensive process. 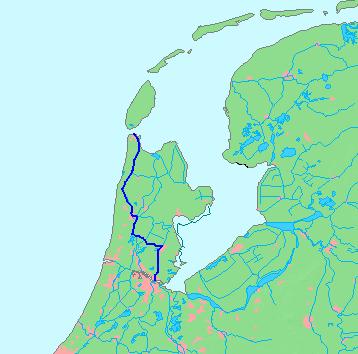 When the 80-kilometer canal was finished, in 1824, it was the widest and deepest canal in the world.  But the canal was too narrow and winding for ships to be able to sail, to they were pulled along by horses instead.

The sluice you see in the photo is the Willem I sluis, named after the King who commissioned the digging of the canal.

At times instead of taking the ferry to Al Ponte, Jan and I walk across this sluice. Just east of the sluice is another one, the Willem III sluice, which was constructed in 1861 to accommodate additional traffic.  It lost its function when the IJtunnel was built (in 1968).

Oh, the green-sided three-master is a square rigged sailship built in 17th century style, complete with figurehead and canons.  It functions as a hostel.