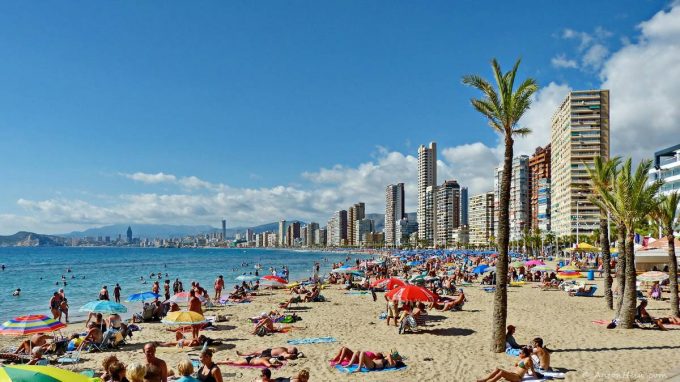 Those who know us will be flabbergasted — shocked, even — to learn that Janet and I just spent a week in Benidorm.

Benidorm is a Costa Blanca city that went from the proverbial ‘picturesque small Spanish village’ in the middle of last century to one of today’s worst examples of the excesses of mass tourism.

After the fishing industry went into decline in the early 1950s, the town council thought it would be a good idea to target the emerging tourist trade.

After all, the introduction of package tours brought increasing numbers of sun-seekers to Spain and other countries in Southern Europe.

But the town’s leaders could not have foreseen that Benidorm would quickly grow into Europe’s biggest holiday resort — and that it would do so seemingly at the expense of everything even remotely reminiscent of authentic Spain. 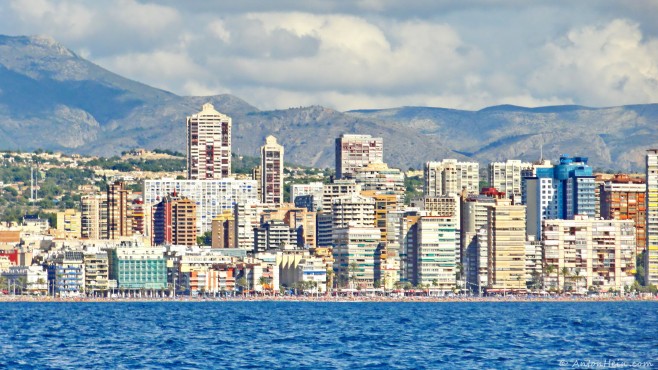 Today the seaside resort has the most high-rise buildings per capita in the world, and its 71,000 permanent residents share their place in the sun with over 2 million visitors a year.

Well over 40% of those tourists are British, and in some areas of town British pubs, restaurants, and hole-in-the-wall eateries vastly outnumber any other establishments.

Such is the case in the Rincon de Loix district, a forest of hotels and apartment towers just behind Levante beach. Locals have jokingly referred to it as BeniYork, or — with less mirth but more honesty — as ‘Nausea Corner.’

Every nook and cranny in the entire district not taken up by hotels, pubs or snack bars is crammed full of stores selling nothing but tat (crap or junk, for those of you unfamiliar with British slang).

That’s so totally not our scene. Normally when we vacation in Spain, which we consider our home away from home, we stay in the old ‘village’ center of a popular Costa Brava seaside resort — quite far removed from that town’s hotel district. There we live, eat and play like the locals — among whom we have made many good friends.

So what in the world were we doing in Benidorm — for an entire week, no less?

One of Janet’s sisters wanted to celebrate her 50th birthday together with family members in a place filled with happy memories. So we got to spend a week with members of the family whom we don’t see often enough (given the fact that they live in Sussex, England, while we live in Amsterdam).

All in all we had a good time, and it was simply priceless to see how much the birthday girl enjoyed herself.

That said, it’s a safe bet we won’t visit the place again.

Mind you, it is not hard to see how Benidorm could appeal to some vacationers, expats, and even locals alike. The place has a ‘seductive’ quality about it.

For many tourists — with the British vastly outnumbering those from other countries — Benidorm offers exactly what they want: Pubs that serve lots of beer and inexpensive grub, cocktail bars, the beach and, above all, sunshine. For two weeks you get to stay in an hotel or self-catering apartment, hang around the pool, see some cabaret shows, and get to eat familiar food served by people who understand and speak English. 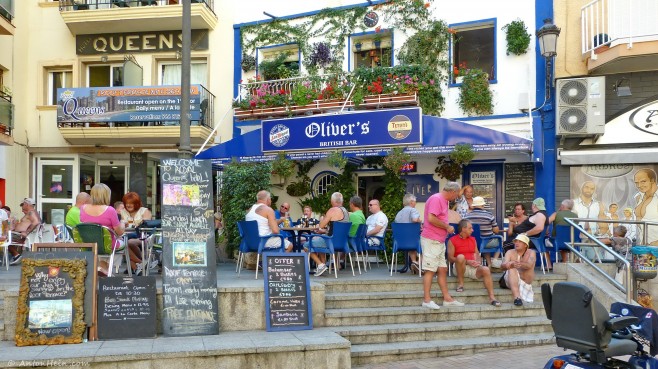 Many of the locals work in the tourist trade, which provides them with a steady income year-round. In talking with some of them it appears they have a laid-back attitude toward the way tourism has changed their town. Most of them live in apartment buildings that are comfortable, roomy, and quite affordable.

The expat community here consists mostly of pensioners, which is why Benidorm may come across as the ‘scoot mobile capital of the world.’ You get to have a place in the sun, while maintaining something of a connection with the home country.

I can understand why expats would settle here. Until quite recently life in Spain was less expensive than it is back in England. Too, the standard of living is quite high: good housing (for the most part); large, well-stocked supermarkets (with lots of products from back home); and of course sunshine — something that is in short supply in the home country.

But the ready availability of British products, pubs, restaurants and people also has something sad about it.

It took me a while before I could put my finger on it — but it hit home when I was sitting on the terrace of a Dutch café (for indeed, Benidorm is also home to a large Dutch expat community).

I was at the café, which was right next to our apartment building, only because it had a free wifi connection that — unlike the paid one at Gemelos 22 — actually worked and was many times faster.

The terrace was filled to capacity with nothing but Dutch people, most of whom clearly lived locally. The barkeeper and his wife were friendly, and the beer and kroket were good.

From the beer mats to the conversations around me, everything was in Dutch.

The music? Well, it was typical of what you find in many similar old Dutch bars: a selection of crooners, Seventies oldies, and Dutch-language sing-along songs.

The barkeeper’s wife called out names, and who ever was called then lip-synced to the tune of their choice.

After eating and drinking here a few times (yes, for the internet connection), it hit me: this is like a caricature of the real thing!

Having lived abroad myself I know that it can be nice at times to eat something typically Dutch, to hear and speak your own language, and buy something that reminds you of Holland.

But I’ve also visited Dutch expats who had transformed their homes into something of a museum of trinkets they’d probably never even consider buying if they had not moved away from the Netherlands.

I remember getting invited to expat events that were meant to be ‘typically Dutch,’ but somehow did not quite feel real — pretty much the same way a knockoff Prada bag doesn’t quite hit the right buttons.

Anyway, these folks were enjoying themselves, so no harm done.

A word about food. When we’re on vacation, we like to eat what the locals eat. Within reason, mind you. 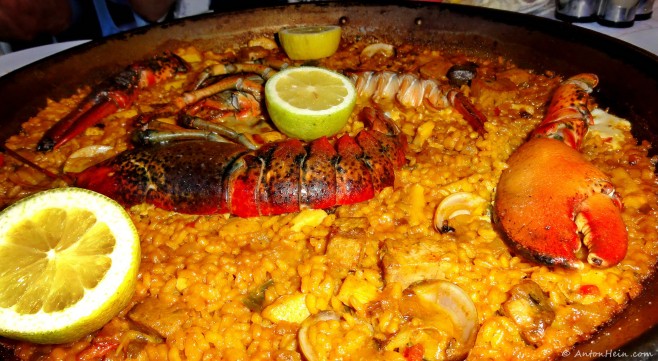 But in this district just about every ‘restaurant’ and eatery serves nothing that surpassed the level of poor quality pub grub or fast food. In desperation one day I took refuge in a Burger King, but alas… their version of the Western Bacon Cheeseburger was so far removed in look, taste and consistency from what the menu promised that I simply abandoned it after a few bites.

We did find some good food, though. The Paella at Artigas II stood out — as did the far-too-surly-and-inattentive waiter and the friendly manager.

An honorable mention goes to Casa Pepi, where we went on a Monday night. The friendly waiter honestly told us that the seafood mentioned on the menu was not available, since the fishing fleet does not go out on Sunday, and this place did not serve anything that wasn’t day-fresh. 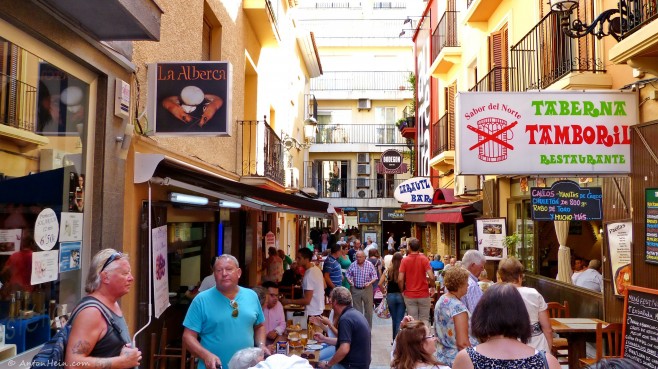 Speaking of which, if you want something authentically Spanish, your best bet is to make it to the tapas alley in the old town near the harbor.

Meanwhile, Jan and I took care of breakfast and, often, lunch by buying fresh bread and fantastic Jamon Iberico at the local supermarket. The ham was so good that we actually brought some of it home — vacuum packed by a very friendly lady at the Dialprix meat counter.