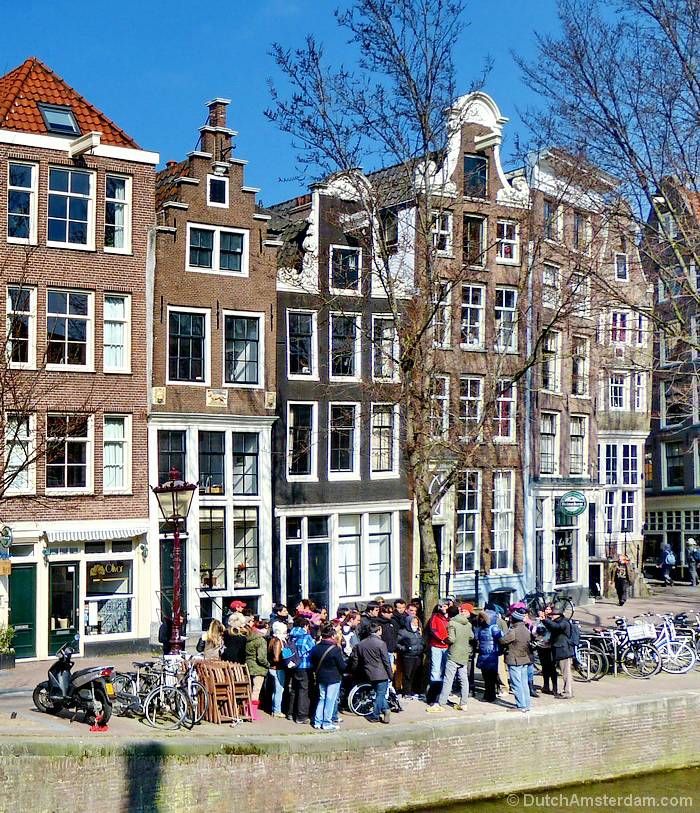 We’re a few into April, but it’s still bitterly cold in Amsterdam — the tail end (hopefully) of an unusual cold spell that started early in March.

And then to think that last year, in 2012, we were enjoying sunny days, warm enough to spent some time relaxing at outdoor cafes (after what had been the warmest March on record — hence in 100 years).

But look at the photo. It’s a group of tourists on a guided tour, here at the outskirts of the Red Light District. All of them are dressed in warm winter clothes and jackets.

According to the newspapers weather scientists contribute the cold spell to global warming. Yes, warming. Something or other to do with the ice at the North Pole melting, which apparently contributes to a shift in global weather patterns.

Frankly, over the past decade or so the weather in this part of the world has been erratic, to say the least.

In the Netherlands some recent winters have been unseasonably warm — and others unusually cold. Likewise, some summers have been, well… great, and others have been grey and dreary with more rain and dark skies than one can bear.

Anyway, yesterday I took at walk downtown. After stopping for some coffee at ‘t Loosje, one of my favorite cafes at Nieuwmarkt, I made my way back to Central Station.

I saw this group of tourists at the beginning of Oudezijds Voorburgwal, the oldest canals in the city. They’re standing across from a row of 17th and 18th century houses.

Normally many façades of houses along Amsterdam’s canals are kind of hidden behind the trees. But during this time of year, when you can expect sunny days with blue skies (regardless of what the temperature is), you can take gorgeous photos of gabled houses like these.

And yes, the sky really is that blue. All you need to do to capture skies like this is to make sure you stand with your back toward the sun.

As for the Red Light District… the City of Amsterdam has worked hard to turn it into a shadow of its former self.

Its efforts to gentrify the area have met with mixed success, but especially if you visit during the day — mid-morning through mid-afternoon — you should be able to concentrate on the beautiful architecture rather than on the shadier offerings.

If you’re at all concerned, simply stick to Oudezijds Voorburgwal, which with very few exceptions has been spared just about anything the district is known for.