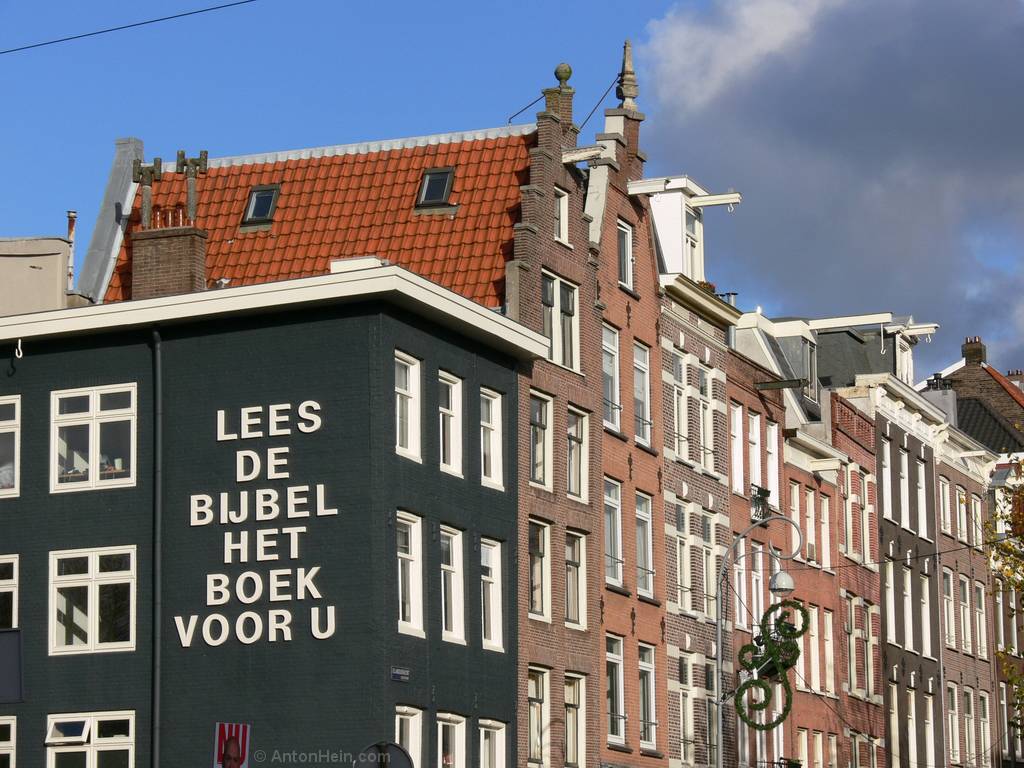 The sign on this house in the center of Amsterdam says, “Read the Bible, The Book for You.”

A few years ago Janet and I were invited to have dinner at the home of someone we had recently met.

We looked forward to an evening of fellowship, fun, and good food. Very good food, actually, as our new friend had made it clear that he was a connoisseur of haute cuisine. During the few times we had met him at our Irish pub hangout he had waxed eloquently about the differences between French truffles and those found in Northern Italy, provided us with an analytical comparison between the cooking methods employed by various chefs (the name of which escaped us), and assured us that there are no finer skillets than those produced by Brand X.

Unfortunately, while we had a pleasant evening, supper was anything but a fine dining experience.

We’d been told to stay out of the kitchen while our host put the finishing touches on his creation. While we leaved through some coffee table books we could hear typical kitchen sounds, including the tell-tale beep-beep-beep of a microwave oven — followed by a barely audible curse and a loud assurance that dinner would be served any moment.

To be honest, the roast potatoes were decent. I wouldn’t have minded a few more, but there weren’t any left.

The vegetables had been, well, nuked into oblivion, and the steak — “imported from Argentina!” — almost made us look for the Nike logo.

Later, after helping clear the table, we admired our friend’s collection of cookbooks — at least a hundred of them, neatly lined up on shelves at the far end of the kitchen.

It was my wife who noticed that with few exceptions all the books looked brand new and unused.

All our friend’s enthusiasm with regard to cooking could not hide the fact that there was a big gap between talk and walk.

I remembered this experience the other day when we were in discussion with someone who is quite opinionated regarding a wide range of doctrinal issues.

Most of his opinions are based on a mixture of incorrect interpretation, wrong information, and personal preference.

In presenting our own views we referred to various passages of Scripture, as well as information from a number of books, encyclopedias and online research resources.

Unfortunately our friend remained adamant. The resources we suggested were summarily dismissed — even when we quoted a widely accepted book by one of the scholars he himself had earlier referred to.

“Obviously xyz is wrong in this instance,” he said — offhand rejecting the information without being able to explain why and on what basis he did so.

Part of the problem is that the scholar in question is thoroughly familiar with Biblical Greek, while our friend may at a stretch be able to name one or two letters of the Greek alphabet.

That comes across as someone whose cooking experience is limited to using a microwave criticizing, say, the late Julia Child’s expertise.

Ironically this same person proudly pointed out to us how well-marked his Bible was. Color-coded passages, lines and arrows, notes written in the margins, and a forest of Post-It notes testified to the fact that this was a well-read Bible. But well-read does not equal well-used.

We knew that much of the highlighting was the result not of personal Bible study, but of hour-upon-hour of listening to so-called Word-of-Faith teachers — both on TV and in person.

Filled with a mixture of doctrinal errors, self-help concepts and snake-oil this kind of teaching is the spiritual equivalent of junk food — never satisfying and always lacking in true nourishment.

Our friend is a tragic example: we’ve seen him fall from one error into another, dismissing good advise, scholarly resources and sound doctrine to the point where he has now become his own highest authority.

That’s why Janet and I always encourage Christians to study the Bible for themselves — making use of helpful resources.

Doing so provides a much-needed balance to the daily barrage of teachings Christians are exposed to.

More than that: it provides us with knowledge and insight necessary for spiritual discernment.