Home
Amsterdam
Prinsengracht in the fall 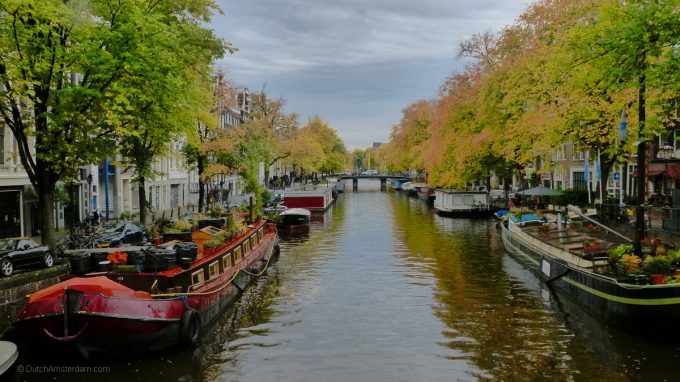 The Prinsengracht is one of Amsterdam’s most beautiful canals.

This (slightly HDR) photo show different types of houseboats, including converted barges. The one on the right-hand side in the front is the Houseboat Museum, which is definitely worth a visit.

I was born on a houseboat myself. It was also moored at Prinsengracht, directly across from the Westerkerk — the Church whose bells Anne Frank described hearing from her family’s hiding place.

Among my earliest memories: I never wanted to go to sleep, and as soon as my mother had left the room I would often stand on my bed and look out of the window — fascinated by the passing boats, the people walking along the far side of the canal, and the traffic on the nearby bridge.

Too, underneath my bed there was a drawer full of toys.  How could I go to sleep with all those distractions?

Another thing I remember from our time on the house boat is going to a Bible Club on another houseboat.

That houseboat was home to a mission outreach by an American organization called Bible Centered Ministries International. BCM International is also referred to as the Bible Club Movement.

In 1949 BCM missionary Anne Punt teamed up with Dutch colleague Annie Verboom to bring the Good News of Jesus Christ to an Amsterdam still reeling from the devastation of the Second World War.

At first the club took place in a house on Herengracht, and later it was moved to a houseboat.

I was born in 1957, and was too young to remember much of my visits to the Bible Club houseboat, but I distinctly remember the ‘Two Annies’ — as everyone referred to them.

Incidentally, at the time there were not nearly as many houseboats in the city as there are now.

The reason our houseboat was located in such a prime location was that a previous houseboat owned by my parents had sank during a storm, while it was anchored along with other houseboats, in a part of the harbor of Amsterdam.

The city then offered my parents and others temporary mooring locations in the center of town.

Later, more and more houseboats came along — in large part because not enough regular housing was available.